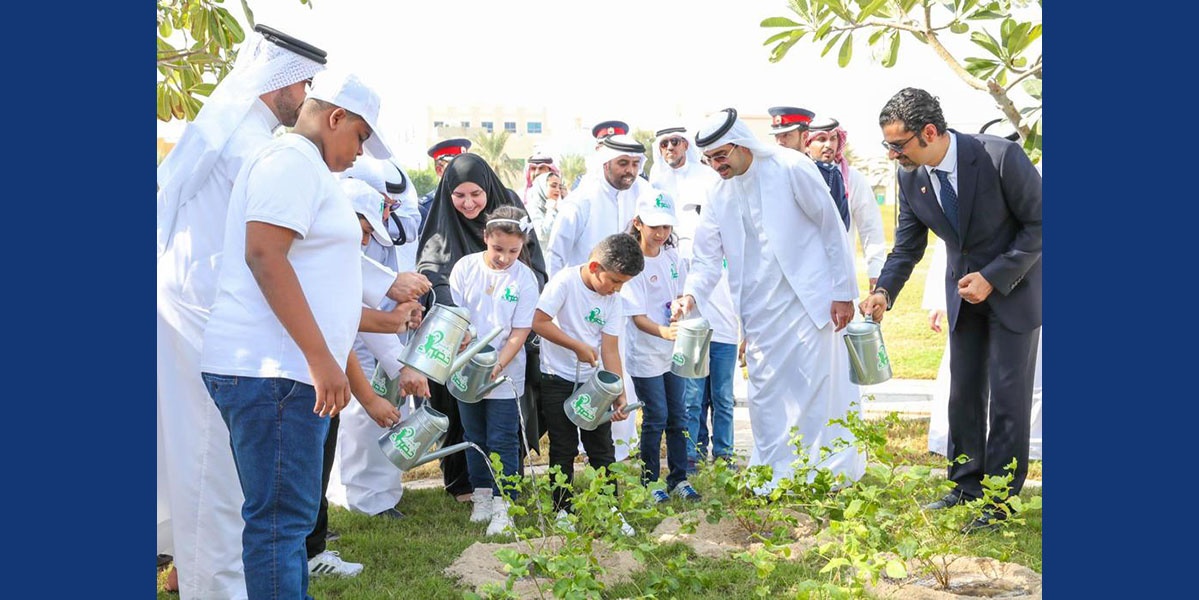 The initiative was launched in cooperation between the Royal Fund for Fallen Servicemen, NIAD and the Ministry of Municipalities' Affairs and Agriculture, with the participation of fallen servicemen's children.

HH Shaikh Khalifa bin Ali affirmed that the Southern Governorate's keenness to hold various events and social initiatives in cooperation and coordination with the competent authorities, noting that the initiative to plant " Razji" seedlings in which the children of the late servicemen participated was in appreciation of fallen servicemen's dedication, sacrifices and memory. He stressed that the initiative contributes to strengthening the principle of community partnership, as well as  the values of belonging to the nation and citizenship.

Minister Al-Mubarak affirmed that the initiative aims to pay homage to those who had sacrificed their lives for the sake of the homeland, stressing the importance of the noble move which embodies the memory of those heroes. He also extended his thanks and gratitude to the Royal Fund for Fallen Servicemen for this kind initiative that filled the hearts of the families of the late servicemen with joy.

Royal Fund for Fallen Servicemen's Director asserted that the initiative is a token of gratitude to the late servicemen, noting that it reflects the appreciation of all social segments to them for the sacrifices they had made while defending the nation. He also paid tribute to HH the Southern Governor and all the relevant authorities for their support to such noble initiatives.

Shaikha Maram bint Isa Al Khalifa affirmed that the initiative launched by the Royal Fund for Fallen Servicemen is a token of appreciation to the late soldiers who lost their lives while defending the nation, stressing that their sacrifices will always remain engraved in the national memory.

She added that Involving the children of the fallen servicemen in this noble initiative by planting the Razji seedlings in the various governorates of Bahrain is an ideal opportunity to instill national values and raise environmental awareness in order to cement belonging to the nation.

During the event, a number of children of fallen servicemen and officials planted the Razji seedlings, in honour of the sacrifices of the nation's latte soldiers.

Souvenir gifts were also presented to the late servicemen's children.