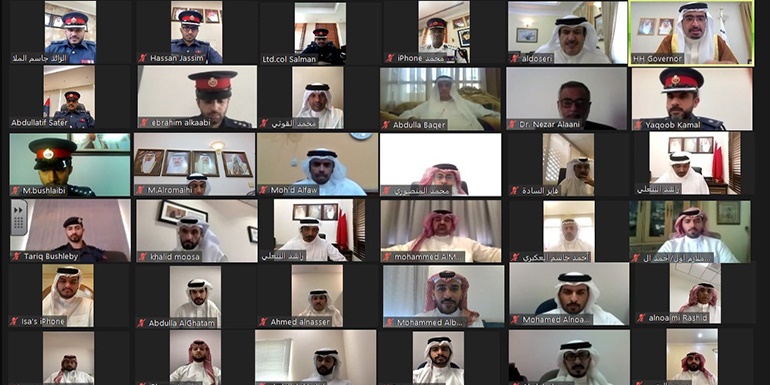 HH Shaikh Khalifa bin Ali bin Khalifa Al Khalifa, Southern Governor has met with the people and citizens of the Governorate through the “Virtual Majlis”, a unique technology designed to allow the Governorate’s officials meet with locals to discuss their needs. At the beginning of the meeting, HH the Southern Governor welcomed the attendees, reiterating that the  “Virtual Majlis” is an important platform that contributes to bolstering community links and bonds among the Governorate and citizens.

HH the Southern Governor underlined that the Governorate is keen to follow up to all the development, social and vital needs of its people, pointing out: “We are looking forward to meeting all the requirements of the people of the Governorate, in addition to we are striving to upgrade all our services through coordinating with the government agencies and NGOs in order to activate community partnership,”

Moreover, HH Shaikh Khalifa followed the progress of several social and development projects being implemented across the Governorate, including infrastructure projects and re-paving some roads which are carried out in cooperation  with the concerned authorities.

He also praised the efforts of the security men and their cooperation with the Southern Governorate in dealing with the Corona pandemic (Covid-19), through their active participation in adopting a series of meaningful initiatives and programmes.

On their part, the attendees have expressed their appreciation and gratitude to HH Shaikh Khalifa bin Ali Al Khalifa for his keenness to establish links with people of the Governorate, adding that this reflects his desire to continue launching security and development initiatives to showcase the modern side of the Governorate.