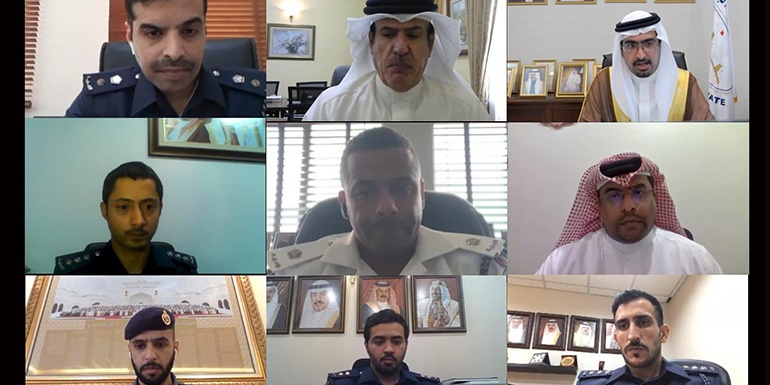 At the beginning of the meeting, HH welcomed the attendees, affirming that the Governorate is constantly delivering the needs of its people and meeting their aspirations in order to bolster community partnership in line with the directives of HE Interior Minister General Shaikh Rashid bin Abdullah Al Khalifa.

Furthermore, he praised the efforts of the security departments during the Ashura season, which made it a huge success by coordinating with Matams’ heads to ensure adopting the health guidelines issued to combat the spread of the coronavirus “Covid-19”. HH Shaikh Khalifa also hailed the mutual coordination and cooperation with the security departments to launch the 2nd HH the Governor Virtual Security Programme which aims at bolstering security and community awareness among youth.

“We are keen to receive and follow-up to the security needs of the Southern Governorate’s people. We have introduced many electronic and virtual channels to ensure our people have various convenient options to escalate their inquiries and share their requirements with us so we can communicate them to the competent authorities to have them addressed. We have received to this point 56 suggestions in the security field, all of which are meant to cement our unique security initiatives,” HH Shaikh Khalifa said.

From his side, Captain Mohammed Khan, the Riffa Civil Defence Chief projected a visual presentation showcasing the methods being used to monitor accidents and security issues in the Governorate, during which he praised the swift response of the officers to inspect any accident or complaint.

From their side, the attendees hailed the Governorate’s efforts towards cementing community partnership which plays a prominent role in maintaining the safety and wellbeing of the Southern Governorate’s people and residents.